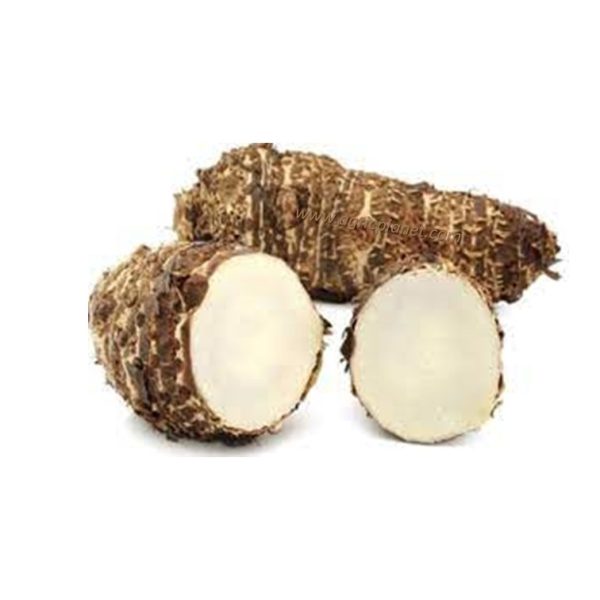 Giant Taro/Mankachu (scientific name: Alocasia macrorrhizos) is a flowering plant species in the Arum family (Araceae). This vegetable is native to the tropical rainforests of Southeast Asia, New Guinea, and the Queensland islands. Philippines are cultivating this since long ago, various Pacific islands, and other tropical regions.

It is popularly known as Mankachu in Bengal. However, other names are also available depending on the region. For example in North Bengal people call it Fankochu. In English, we call Giant Taro, as Giant Alocasia, and in Australia as ‘cunjevoi’ (the same term also refers to sea creatures).

It’s was originally cultivated in the Philippines, but early Austronesians were introduced to Giant Taro/Mankachu from wild varieties in Taiwan. From the Philippines it spreads to the rest of Southeast Asia and eastward to Oceania. This made it the staple crop of the Pacific Islands. It is one of the four main cassava species cultivated by Austronesians as a sugar source. Others are Amorphophallus paeoniifolius, Colocasia esculenta and Cyrtosperma merkusii.

It cultivates in every part of Bangladesh

Each has multiple cultivars. Their leaves and stems are edible with good cooking, although people eats the whole stem. It contains a large amount of raphides that cause an itchy throat. We can see this plant here and there in the rural areas of Bangladesh. A lot of careless growth of these standards but a lot of quality.

However, there are some curds, which can cause itchy throat. So it should be cooked and eaten properly. Apart from cooking, Giant Taro/Mankachu can also be eaten as a filling. We can see this Giant Taro/Mankachu  in several countries including Bangladesh, India in South Asia. People use it as a medicine by many people. Experts say that eating kachu nourishes the body and increases Venus. Removes roughness in ears and throat. Apart from this, Giant Taro/Mankachu has some other qualities.

This vegetable contains useful nutrients like magnesium, iron, fiber, potassium and manganese. It contains a lot of antioxidants. It has more fiber than white potatoes. As a result, it is easily digested. It removes constipation and indigestion.

It is effective in correcting iron deficiency in the body and improving eyesight. Mankachu contains useful antioxidants and beta-carotene, which keep the body free from disease-causing free radicals. Apart from this, the vitamins contained in it are beneficial for the eyes.

It has the highest value among all types of kahur. Giant Taro/Mankachu is also effective in preventing headache, viral cold and cough.

The vitamin C in this vegetable boosts immunity. It produces more white blood cells in the blood. It can eliminate disease-causing substances in the body.

Vitamins in it are great for skin. It removes skin wrinkles and makes the body look fresh.

The dietary fiber and potassium in it are good for the heart. It regulates heart rate. Blood pressure is controlled by removing arterial congestion. Source: healthbenefitstimes.com.

Be the first to review “Giant Taro/Mankachu”Cancel Reply