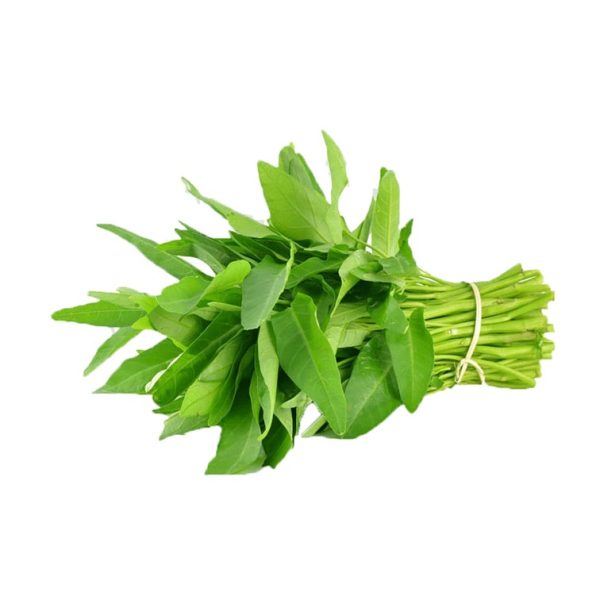 Water Spinach is locally called KALMI. Ipomoea aquatica is a semi-aquatic tropical vine. It is eaten as a vegetable. Its native habitat is unknown, but it grows in tropical and subtropical regions around the world. In English it is called water spinach, river spinach, water morning glory, water convolvulus, Chinese spinach, Swamp cabbage and Kangkong in some parts of Asia.

Kalmi plants grow in water or wet soil. Its stems are 2-3 meters or more long. Roots emerge from nodes or segments of the stem. It is hollow and can float on water. Water Spinach leaves are broadly triangular or oblong, and are 5-15 cm long and 2-8 cm wide. Kalmi flowers are more trumpet shaped and 3-5 cm wide. Flower color is usually white and purple at base. Flowers produce seeds. The plant comes from these seeds.

Farmers cultivate in East, South, and Southeast Asia. This plant grows naturally in water or wet soil near water, and does not require much care. It grows widely in Malay and Chinese cuisine. It is quite popular as a vegetable in Bangladesh. People cook as bhaji means boil vegetable. In addition, there is a trend of cooking and eating fish with broth. The plant once propagates in the United States, but is considered a ‘noxious weed’ due to its high growth rate.

Water Spinach is rich in calcium which helps in strengthening the bones. Therefore, mothers give this vegetables to their children from childhood, they no longer need the fancy food supplements of the market.

It contain a lot of vitamin ‘C’. It acts as an anti-oxidant and prevents various diseases in the body.

Kalmi works as an antidote to spring diseases.

Being rich in iron, this vegetable is very beneficial for anemia patients.

If the baby does not get the mother’s breast milk after birth, if the mother cooks Kalmi vegetables and feeds the baby, the baby will get enough milk.

Constipation is removed by eating kalmi greens regularly. Or if you have constipation, take kalmi greens and squeeze a small amount of juice and mix it with sugarcane molasses to make a sherbet and drink it in the morning and afternoon for a week.

Helps to dissolve the boil

If you eat this kalmi vegetable fried and cooked every day for a few weeks, you can get rid of itchiness.

Gonorrhea causes burning pain at the place of urination. At that time, taking 3/4 teaspoon of Kalmi juice for 3 weeks will reduce the irritation.

Helps to rid of insect bits

If bitten by ants, bees, wasps or any insects, the pain will reduce if the juice of the leaves of this plant applies along with the tips.

In case of amasha, mixing sugarcane molasses with the juice of kalmi leaves and making a sherbet and eating it regularly in the morning and afternoon relieves the amasha. This water spinach is mainly fibrous food. So Kalmishak is very useful for fast digestion of food in the body.

Kalmishak is especially beneficial for the eyes. Kalmishaka sharpens eyesight.

Increase Iron in the body

Kalmi vegetable is very beneficial for anemia patients as it contains sufficient amount of iron. This vegetable also plays an important role in maintaining the necessary blood supply throughout the body.  Kalmi vegetables play a beneficial role in eliminating menstrual problems.

You can also eat Kalmi vegetables to relieve insomnia.

Be the first to review “Water Spinach”Cancel Reply